“Science knows no country, because knowledge belongs to humanity, and is the torch which illuminates the world.”
– Louis Pasteur

There are few endeavours that bridge the divide between people, places, and politics as well as the pursuit of knowledge. Science as a pursuit to understand the natural and social worlds, is by its very nature, collaborative, inclusive, and has tangible benefits for society. Even governments often encourage collaborations to further scientific research, share and transfer knowledge, and define scientific policy which goes a long way in helping forge socio-political ties.

For years now, Indo-French collaborations between individuals and research institutions with bilateral government funding, have helped strengthen ties between the two countries. The National Centre for Biological Sciences (NCBS) and the Institute for Stem Cell Science and Regenerative Medicine (inStem), among others, have witnessed fruitful collaborations at different levels.

Grants:
The Indo-French Centre for the Promotion of Advanced Research (CEFIPRA) helps initiate new, short-term collaborations in the fields of science and technology, with support for academia-to-academia and academia-to-industry programmes. Grants from the Agence Nationale de la Récherche (ANR) and National Centre for Scientific Research (CNRS) can help sustain collaborations and have a more long-term research scope.

International Research Programmes (IRP):
Formerly called the International Associated Laboratories (LIA), IRP is a long-term collaboration involving funds, resources, personnel and publications between two research teams, one in France and the other in India, which fosters an open research environment.

The first LIA was set up in the backdrop of a longstanding collaboration between NCBS and the Developmental Biology Institute of Marseille (IBDM) between the laboratories of Satyajit Mayor and Thomas Lecuit. Named SysTiM (Systems Biology of Tissue Mechanics), the LIA brought together biologists Mayor and Lecuit with experimental and theoretical physicists Pierre-Francois Lenne and Madan Rao in a project aimed at understanding the biochemical and physical basis of epithelial tissue organisation and dynamics. The complementary expertise of the French and Indian partners have enabled a quantitative study of these dynamic processes at different scales of organisation. 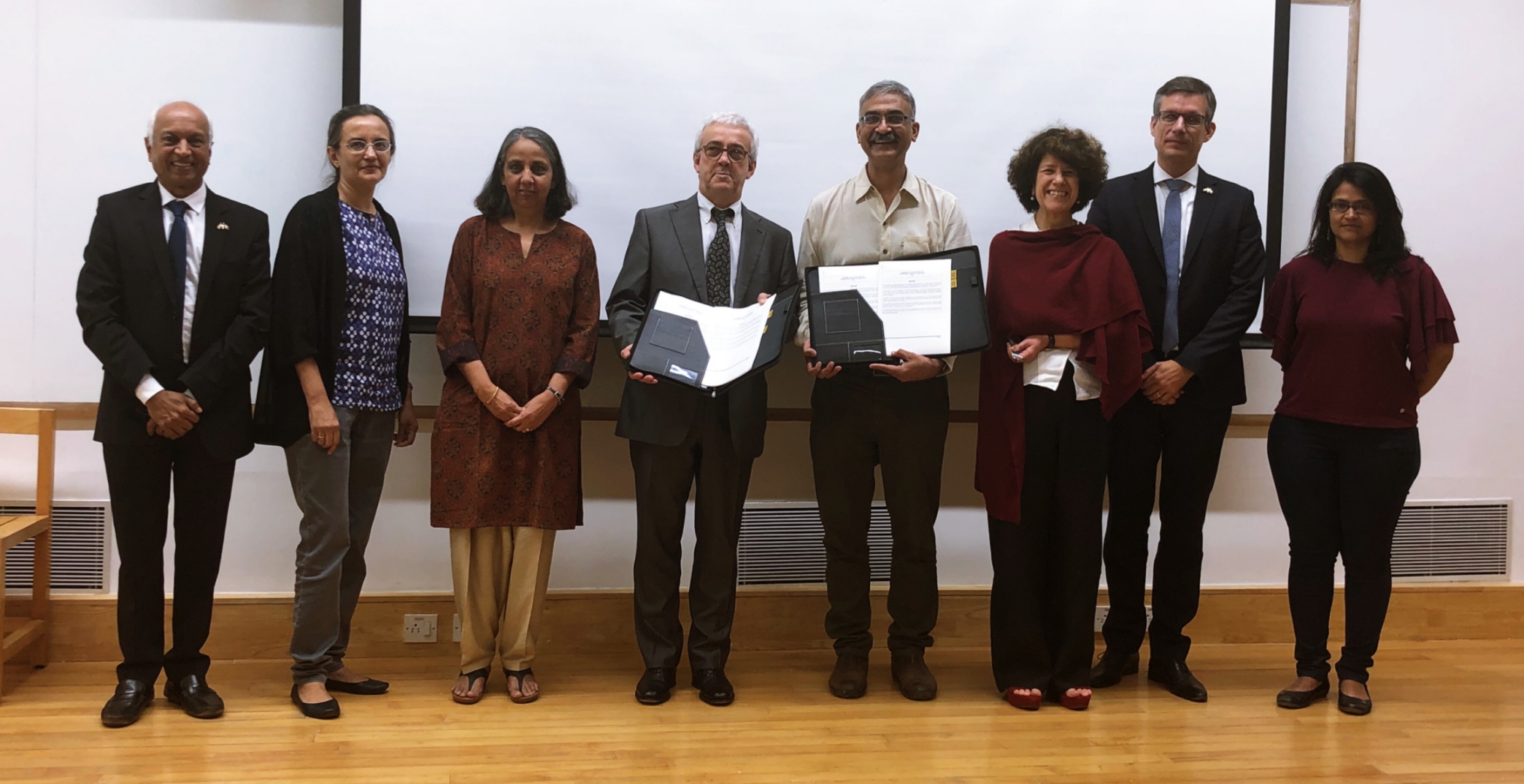 In January 2019, the CNRS signed a memorandum of understanding with NCBS to establish a second LIA at NCBS. The Impact and Regulation of Calcium Signalling in Drosophila Immune Cells or CALIM association partners Prof. Angela Giangrande of the CNRS and with Prof. Gaiti Hasan of NCBS, with support from the University of Strasbourg. CALIM was born from a relationship built during a CEFIPRA grant – testimony to how effective short-term research funding can be in establishing long-term scientific collaborations. These collaborations will allow for the exchange of researchers in both directions and for new directions to emerge. A series of annual workshops to facilitate the sharing of ideas and training of early career researchers is envisaged as part of the endeavour between the two institutes.

Dr Srini Kaveri, Director of New Delhi Bureau of CNRS says, “CALIM, is a collaborative programme to intensify research activities of scientists of the two countries to further explore the impact of calcium signaling cascade in the biology of the immune cells, from the development to their function. This endeavor also provides an exciting platform for young students for in-depth training and acquiring expertise from world-class investigators in state-of-the-art laboratories.” “We hope that from these LIAs or IRPs will be born partner laboratories or centres that will cement these strong relationships between scientists at NCBS-inStem and our colleagues in France for a long time”, Prof. Mayor expresses.

Other NCBS and inStem scientists have benefited from the Indo-French connect over the years. A shared passion for jazz music over a sabbatical, led Prof. Madan Rao (NCBS) and Dr Pierre Sens (ESPCI, Paris) to discuss their research interests in cellular functions. Under CNRS, this friendship could mature into a more formal collaboration. The collaboration’s funding support, student mobility clauses, and increased visibility have helped recruit more promising talent to further the research goals. “As science is a globalised knowledge system, more grants and collaborations of this kind are crucial to facilitate better research”, quips Prof Rao.

Dr Aswin Seshasayee’s collaboration with UPMC delved into bacterial chromosome organisation and its connection to gene expression states. The work has resulted in student mobility, a joint publication with another paper in the pipeline, fresh ideas for a subsequent grant, and has also helped standardise protocols at the Next-Gen Sequencing facility at NCBS. Dr Minhaj Sirajuddin’s collaboration with the Institut Curie has also been quite fruitful. The laboratories have shared reagents, personnel and expertise, all of which has propelled research investigations with two papers awaiting publication. Dr Tina Mukherjee’s collaboration at inStem, while still fresh, has established a vital link in the research for blood cell development and metabolism. “The involvement of a senior French scientist has led to strong mentorship, richer interactions, and deeper scientific insights,” Dr Mukherjee reflects.

The benefits of collaboration work both ways. Dr Shashi Thutupalli mentions that the “open laboratory” approach allows French researchers to make use of NCBS facilities like the microfluidics and quantitative microscopy. Dr Mukherjee mentions how French students learn to conduct metabolic analyses at inStem, while Indian students receive training in RNA analyses techniques and embryonics in France. Prof Rao mentions that the Turing Institute is keen on sourcing faculty from India, trained during the exchange tenures. In addition, Ambika Anupama, an alumnus of NCBS, is currently working as a scientific coordinator at the French Embassy – a further strengthening of institutional ties through an exchange of talented personnel.

Beyond the intellectual aspects, there are other tangible benefits of research collaborations. “Inter-country research ties have the advantage of facilitating cultural exchanges, while learning how science can be done differently,” Rao and Mukherjee concur.

“The collaborations have helped open up a channel of communication at the scientific and governmental levels, which allows us to connect to relevant people when needed”, says Dr Vineetha Raghavan, Grants Manager at the RDO office, NCBS. “It has also led to open invites from other platforms for collaborations, such as from the University of Cote d’Azur – an association of higher education institutions from the 3 French provinces.”

With an increase in publications authored by researchers from different countries, collaborations are defining scientific progress and global policies today. In Charles Darwin’s words, "It is the long history of humankind (and animal kind, too) that those who learned to collaborate and improvise most effectively have prevailed."

Our future lies in strengthening scientific ties to inform and influence eco-political decisions – hoping the collaborations today, lead to better institutional frameworks for the science of tomorrow.

Better Together: Fostering Collaborations at BLiSc