Sustaining the Stripes: An Adaptive Mindset for Future Prospect

The tiger, one of the most iconic species, has been a subject of constant attraction since time immemorial! In the last two decades, the tiger population has been rising at 6% per annum in many protected areas throughout India1 (Figure 1). According to the latest tiger census (2018), the country became home to 2,967 tigers1 (cubs not included due to the high infant mortality rate). Without a doubt, India achieved its target of doubling the tiger numbers, as per the St. Petersburg declaration on tiger conservation (2010). 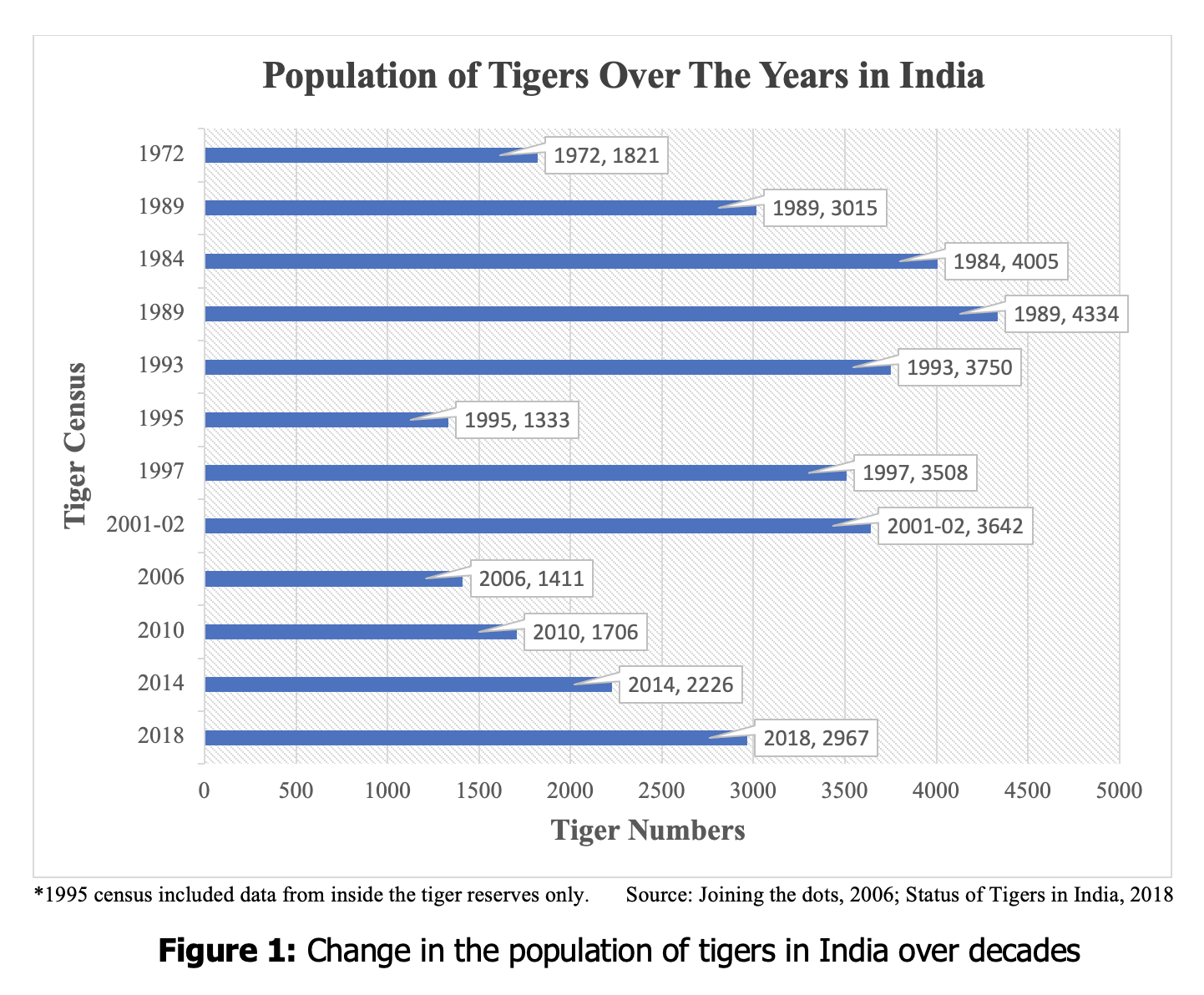 Besides the perceptible recovery (increase) in the tiger population, the carrying capacity of the tiger reserves in India may add as a caveat. This pops a question -  are we becoming a victim of our success?

The increase in the number of tigers may also associate with an increase in livestock depredation and human confrontation rates2. On top of that, shrinking habitats and tigers roaming beyond the protected areas could be lethal to the tigers' existence due to threats like electrocution, poisoning, poaching, and trapping3. Various other factors, such as inbreeding depression (reduced survival and reproductive success of an individual due to mating among closely related individuals4), which are not visible from the naked eye, are also affecting the long-term survival of these majestic species5.

The protection of the tigers is inseparable from the protection of the forests it roams in. Tigers are wanderers who move from one forest to the other. However, at present, their movement is getting restricted. The forests are shrinking, and forest corridors are fragmented, due to anthropological developments like roads, railway lines, agriculture, etc. This, in turn, leads to the isolation of many species of wild animals and their populations. Meanwhile, the population of tigers is continuing to increase. Along with them, the population of other sympatric species (those utilizing the same resources within a similar distribution range like a leopard (Panthera pardus), dhole (Cuon alpinus), wolf (Canis lupus), etc., is also increasing. This will eventually result in higher inter (between the members of the different species) and intraspecific (same species) competition6, indirectly affecting the prey population within that area. It can also suppress the population of the small carnivores (carnivorous mammals typically weighing less than 15 kg). Large carnivores are known to influence the behavior and abundance of the small carnivores, as they can compete for the same resources. The top predators are also known to kill them7.

An outlook that believes protecting the parks/sanctuaries will be enough is amiss! Currently, 35% of India’s tiger population resides outside the tiger reserves8, where the forests are highly degraded and disturbed due to human presence. As the tiger numbers will increase, threats towards them will also multiply. The unbridled growth of the human population with their unceasing needs and incautious attitude towards wildlife curtails these remnant tiger population to certain pockets. For species like tigers, large territories, connectivity between populations and forests are necessary to maintain their genetic diversity. Due to human encroachment, the habitat becomes fragmented and since they require large connected forests to meet their ecological needs, this may eventually hinder their continued survival.

Given the increasing tiger numbers with relatively small viable habitats to sustain them, conservation practices needs to be holistic. The focus must be on retaining the population of tigers, in addition to increasing their numbers. It is vital to harbor unique genetic diversity by effectively addressing landscape and genetic connectivity. We should address an array of variables associated with the long-term survival of these charismatic species. Let’s pull together the task of not just saving the tigers but also saving our forests, ecosystem, and precious inhabitants.