Tackling cognition with an ornamental plant

Most of us have heard of Alzheimer’s disease, a neurodegenerative disorder marked by brain cell death and the shrinking of the brain. It is the most common cause of dementia and cognitive impairment, which typically have a devastating effect on a person’s quality of life. There is still no cure for Alzheimer’s.

One way of tackling the progression of Alzheimer’s disease (AD) is to prevent the underlying adverse changes in the brain. A team of researchers from the National Centre for Biological Sciences (NCBS) has recently published an exciting study in the Journal of Medicinal Chemistry, dedicated to neuroprotection against these toxic changes. They used tiny free-living soil worms —called Caenorhabditis elegans—and the often-ornamental butterfly pea plant for their exploration.

Clitoria ternatea, or the butterfly pea plant, is a common sight in many Indian gardens with its charming blue and white flowers. But its appeal does not end there. There are plenty of anecdotes about the memory-enhancing properties of the plant, and it has long been used in traditional medicine in India. As the lead author of the study, Neha V. Kalmankar says, “Plants have hundreds of compounds that could be repurposed for the benefit of society but the first step is to find which ones have the potential for medicinal purposes.” Based on existing academic knowledge of its therapeutic properties, the research team extracted and isolated a set of ultra-stable cyclic peptides (or “cyclotides”) from the plant. They tested these peptides of ~30 residue length on the worms and recorded the impact on the neurons.

Neurons in the human brain synthesize a protein called amyloid beta (Aβ). In patients with Alzheimer’s, these proteins undergo a process called aggregation, where they form large deposits (plaques). The aggregates are toxic to the cells and impair the important tasks neurons need to carry out. This neurotoxicity can be duplicated in the transgenic worms too—manifesting as paralysis in the muscles, chemotaxis defects such as movement deficits towards chemical cues, and oxidative stress. 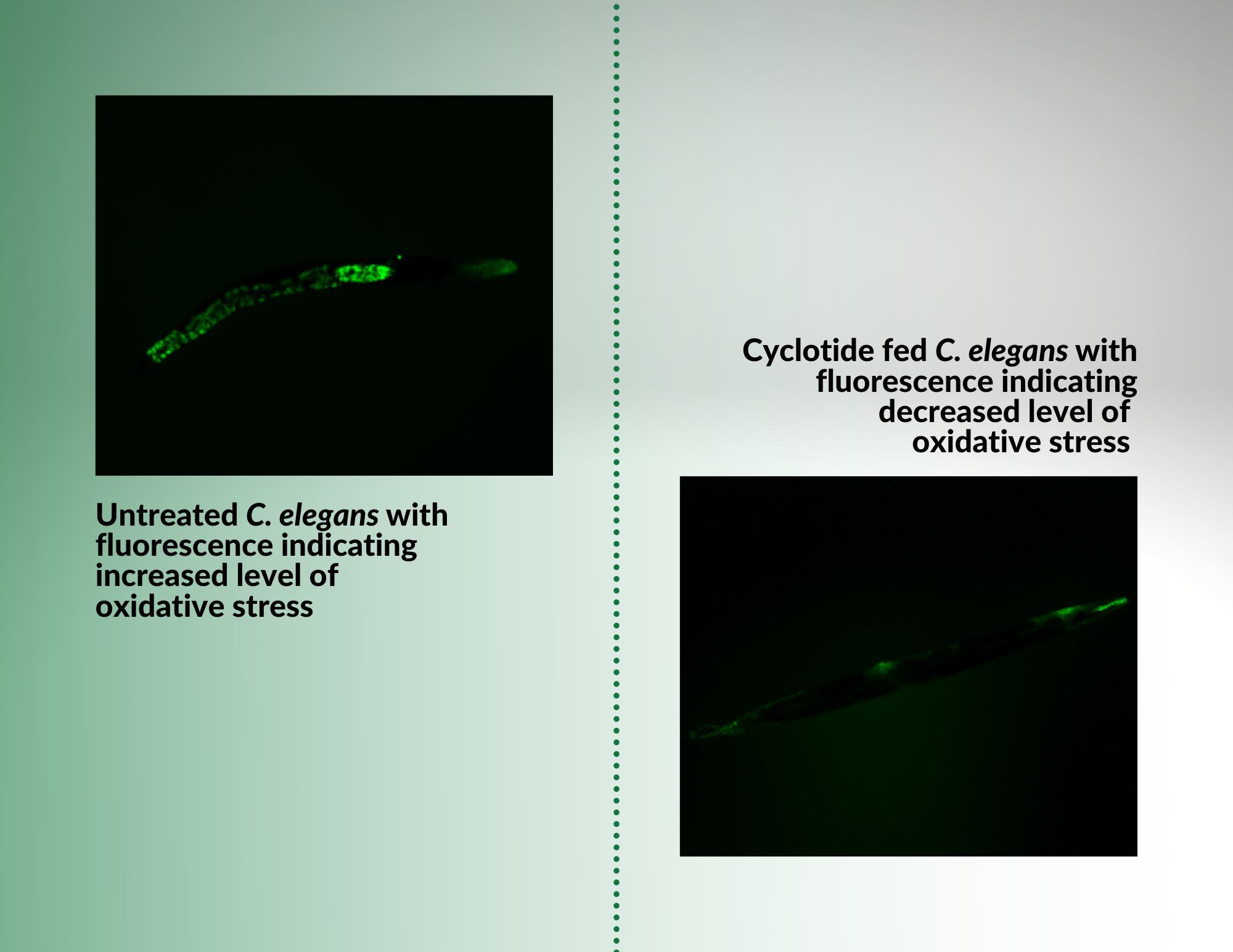 The experiments showed that the cyclotides from the plant protected the neurons against the amyloid aggregate formation. The worms which fed on the cyclotides showed significantly less paralysis than the ones that did not. They also showed that these peptide mixtures displayed antioxidant properties, an already well-established role of the plant. The different experiments provide strong evidence for the beneficial value of cyclotides, given that oxidative stress is a commonly related process in AD progression. Other age-related neurodegenerative disorders such as Parkinson’s disease and Huntington’s disease are also associated with the accumulation of toxic proteins, and this research avenue could lead to treatment options for several such diseases.

Neurodegenerative diseases are difficult to study in humans for a number of reasons due to the complexity of the biochemical changes, the underlying causes, and the limited studies that can be performed on living patients’ brains. Even using other model systems such as mice can prove challenging and laborious, because of their life spans, the ease of transgenic work on them and handling large numbers for each experiment. C. elegans offers an ideal solution. Dr. Radhika Venkatesan, the corresponding author, explains, “Using a soil-dwelling nematode like C. elegans as a model is extremely valuable as these worms have conserved gene function, short life cycle and are experimentally tractable. They are excellent models to screen for therapeutic leads”.

This research makes terrific use of the living systems you might find in your garden to address a global health issue. “Nature provides us with a wide combinatorial library of compounds that can be exploited for drug development, and peptides are an excellent source to start with,” says Neha Kalmankar. The cyclotides found throughout the butterfly pea plant could become one therapeutic solution for neurodegenerative diseases, yet it awaits exploration of more unique qualities! The next time you come across the plant and its beautiful blue flowers, think of the immense medical potential it carries.

This flowering plant may hold treatment for Alzheimer's