How do cell membranes integrate mechanical and chemical signals in response to activated sensors? Satyajit Mayor’s group at the National Centre for Biological Sciences (NCBS), Bangalore, has published a new study that sheds light on this process. The team has shown that when a signal for cell migration activates sensors on the cell membrane, specific proteins are clustered together on the cell surface to form ‘nanodomains’. Nanodomain formation is crucial for cell migration, and involves both chemical and mechanical signals.

A battle rages on in silence.

Though the breach was minor, the sector has been infiltrated by a host of enemies. Mobile defensive units, their surfaces bristling with sensors, rove the battlefield looking for the infiltrators. When a unit locates a foe, it undulates towards the offender.
Stretching itself almost lazily, the defender engulfs the doomed microorganism. Within a few hours, the sector is cleared, and the breach is patched tight.

Sounds like a scene from a science fiction movie?

It’s not. This is actually a very brief description of how immune cells in our body remove invading bacteria. Immune cells’ surveillance and function are highly dependent on the integration of chemical and mechanical signals that they receive from the environment, which ultimately results in net cellular movement towards the invading pathogen. Though much is known about how this occurs, relatively little is known about the molecular events on the cell’s surface that make this possible.

A new study published in Cell from Satyajit Mayor’s group at the National Centre for Biological Sciences (NCBS), Bangalore, has now shed new light on how cell-surface events can affect cell migration. The team has shown that in living cells, proteins called GPI-APs (glycosylphosphatidylinositol-anchored proteins), cluster together into ‘nanodomains’ in response to a specific signal—in this case, a signal for migration. GPI-APs belong to a protein class that includes several immune receptors including CD55, CD59, CD87 and Thy-1, all of which are anchored to the cell’s plasma membrane by a conserved glyocolipid structure called the GPI-anchor. The work also shows that nanodomain formation not only requires chemical cascades, but also a mechanical trigger!

The cell surface is a crowded place. In the cell membrane, which can be likened to the ‘skin’ of a cell, a motely crowd of fat molecules also known as lipids jostle side-by-side with assorted proteins in what seems like total chaos. But there is method to this molecular madness—the Mayor group had earlier found that many of the lipids and proteins in the cell membrane are compartmentalized and restricted to form ‘domains’ with specific functions.

These domains are usually ephemeral and very small—no more than a few nanometers in size. In addition, two key questions about these tiny structures remained unanswered—could the cell control the formation of protein enriched-nanodomains? And how do these GPI-AP nanodomains participate in cell function? 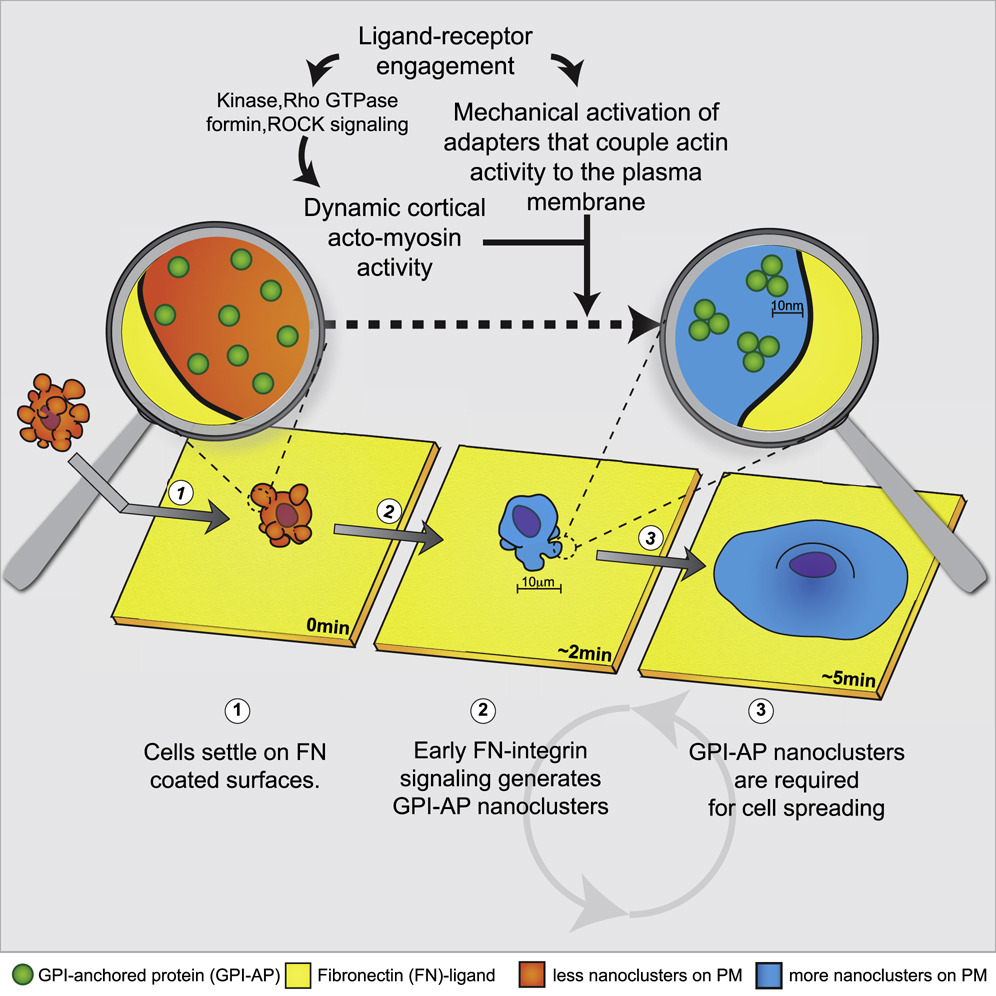 Using a technique called fluorescence resonance energy transfer, the researchers established that GPI-AP nanodomains, usually only 30% in a cell at rest, increase to ~80% when cell-surface sensors involved in cell migration—called integrins—are activated. This proves that the cell can indeed, control the formation of these structures.

The activation of integrins set in motion a sequence of events involving the protein formin—which is required for the formation and remodeling of actin filaments in the cell’s skeleton—and the mechano-responsive component vinculin, which is integral for linking the cell’s skeleton to the cell membrane. Together, these molecules assemble the machinery to couple the fluid cell membrane to the cell’s skeletal system, and literally ‘herded’ the GPI-APs into clusters to form nanodomains.

“The creation of such nanodomains integrates both mechanical and chemical signals necessary for the coordination of cellular signaling events leading to cell spreading and migration,” say Joseph Kalppurakkal and Anupama Anilkumar, who are the joint first authors in the publication that describes these results. “This study is the first to reveal the mechanism behind the active generation of GPI-AP nanodomains on the surface of an intact living cell,” they add.

Another key question that this study answers is that of function—are the formation of GPI-AP nanodomains essential for a specific function, in this case, cellular migration?

Turns out that the answer to this question is yes, GPI-AP nanodomain formation is necessary for cellular migration mediated by integrin activation. Mutant cells with a defect in the GPI-anchor and so unable to form GPI-AP nanodomains on the cell surface, were also found to be incapable of spreading and migrating!

On a broader perspective, the mechanism of nanodomain formation and function as outlined by this study, may thus provide insights into how cells perform signal integration and tuning

“Since the mechanism for generating nanodomains can be activated by a plethora of receptors on the cell membrane, we speculate that the formation of such structures aids the cell in signal integration. When multiple receptors are activated, it is crucial for cells to be able to generate a coordinated response in the midst of cross-talk. We believe that nanodomain formation may be an essential step for signal tuning in cells when they receive multiple inputs during developmental processes and might also be the root cause of pathologies such as immune deficiencies and cancer” say Kalppurakkal and Anilkumar.

“This work is a culmination of a large body of work spanning two decades that started when we first identified these nanodomains. Today we understand how they are made and how they may be related to the functioning of the cell membrane,” says Satyajit Mayor, NCBS Director, and the scientist who heads the team in this research endeavour. “As in any research, with new discoveries, new and exciting questions open up, and this work is no exception. We believe that our insights into the creation of these nanodomains as a consequence of signals from the outside of the cell, have implications for how the cell may interpret received inputs, and integrate information about the state of the cell into its response”, he adds.

Cover image: Moving diagonally from the top right corner to the bottom left, the snapshots represents the time evolution of the cell spreading process on surfaces coated with ligands that activate the integrin sensors. The right half of each individual cell image showcases the fluorescent signal of the GPI-AP (in greyscale) and the left half represents the FRET readout (colour maps),with more blue pixels corresponding to regions with more more GPI-AP nanodomains and more red pixels corresponding to regions without nanodomains. Notice that as the cell spreads, there is a increase in its ‘blue-ness’ which reflects the generation of GPI-AP nanodomains as the integrin sensors get activated. Adapted from Kalappurakkal et al, Cell, 2019.