Building a community of science journalists in India

When I was asked to write about the NCBS science journalism workshop, I dug through my emails and read the application I had sent out in 2013: A CV and a 500 word essay about why I wanted to be part of the workshop. “I intend to pursue a PhD next year,” I wrote. “So, the workshop would help me write better scientific papers.” That’s not quite how my life turned out.

I went into the workshop excited, but confident that a PhD was the only logical step for me at the time. I had completed a Masters and I had a few years of research experience in a wildlife organisation behind me. But at the end of the two-week-workshop I had an epiphany. While I liked doing science, what I loved more was learning, then telling stories about the messy, exhilarating, and often dramatic world of science. So, I came out of the 2013 workshop, knowing I wanted to try my hand at being a professional science writer.

It’s been eight years since then and I’m still a professional science storyteller. That’s because the work captivates me every single day. Everywhere you look, from our kitchens and medicine boxes to the farms, forests, and cities around us, and the skies above us, there’s a science story waiting to be told – stories that inform, engage, inspire, and even enrage and change the way we live and behave. And if there’s one place in India that offers the best crash course there is on the core elements of good science writing, it’s the NCBS science journalism workshop.

Every year since 2011, Anil Ananthaswamy, an award-winning veteran science writer and author of books like The Edge of Physics and The Man Who Wasn’t There, has directed a 2-week long intense course on science writing out of NCBS. He often has a co-instructor for the first week. Our cohort had Jessica Marshall, the science news editor of Chemical & Engineering News. Some have had Geoff Hyde, an expert in research communication. Others have been taught by science journalists like Peter Aldhous, formerly news editor for New Scientist and chief news & features editor with Nature and currently a science reporter for Buzzfeed news, and Rosie Mestel, formerly the Chief Magazine Editor of Nature and currently the executive editor at Knowable Magazine. Together, the instructors have several decades of science storytelling experience between them, spread across a diverse range of publications that often influence the people who make decisions.

Perhaps it’s unsurprising then, that for many participants, especially those of us with no prior journalism background, the workshop has been quite the gamechanger.

“The NCBS science writing course is where it all began for me — so it’s played a huge role in where I am now,” says Aathira Perinchery, a wildlife biologist-turned-journalist, who was part of the first cohort in 2011. She recently won the coveted AAAS Kavli science journalism award for her story “Succession” on FiftyTwo.in, which dove into why ecologists keep finding new species in the Western Ghats.

“Though just a 2-week course, it was a great primer in understanding the essence of science stories, both news stories and narrative features, and I still use everything I learnt for my stories now,” Perinchery says.

There are others like us, who started out as researchers and have gone on to have full-fledged careers as science journalists or communicators. Like Sandhya Sekar, the program manager of Mongabay India. “As someone transitioning from academia to science journalism, with very little idea about the field, the course was immensely helpful to get a feel for the field,” she says. “The course was hands on, an immersive experience that gave a good idea of how the everyday would be, for a practicing science journalist.”

In fact, some practicing journalists have also used the workshop to hone their science reporting skills. Two excellent science journalists -- Priyanka Pulla, an independent health reporter and Anjali Thomas, an editor at The Hindu -- were part of my cohort.

Now, not everyone wants to be a journalist. But whatever form of science communicator you choose to become, it really helps to think like a good journalist — being curious about the people doing the science; asking questions that reveal the journey of the scientific process, instead of focusing on just the end results; being sceptical about what’s being said and reported; looking for what’s not being said and why; and finally communicating all that complexity in a simple and accurate, but engaging and entertaining way.

The NCBS workshop has served as a good primer on what it means to think like a good science journalist. Let me give you a sneak peek into what my two weeks there were like. During the in-class sessions, Anil and Jessica took us through examples of news stories and narrative features, including their own, that appeared in publications like New Scientist, Nature, Discover, New York Times and Science. We read scientific papers, wrote news stories, discussed them in class. We saw how edits improve a story. We had mock sessions with NCBS scientists where we pretended to be in a conference, and wrote about their work. We tagged along with researchers studying termite mounds within the NCBS grounds, watched them carefully slice a mound with a saw, interviewed them, and wrote a feature each. All the time, the emphasis was on being accurate, but engaging.

The workshop does not prepare you for a full-fledged career in science writing in India – no workshop probably will. But what it does achieve, in my opinion, is to open the doors to science writing for those who don’t know where to begin. It’s also a great place to understand how to pitch stories and write for foreign publications, which, frankly, pay considerably more than Indian outlets. As for becoming a good storyteller, that’s something only experience, practice, good editors, and fair and timely compensation can give you.

For me, being a science storyteller has been immensely satisfying. Over the past eight years, I have explored stories around our forests and wildlife, our human ancestors, geology, climate change, food, health, transport, and space. How I tell these stories has also evolved. I’ve written news and longform stories for publications, written scripts and done voiceovers for videos, and I create and host a science podcast Imagined Tomorrow, where each episode explores futures that India may or may not see.

From the outside, the world of science writing can seem impenetrable. But it’s heart-warming to see plenty of successful Indian science writers who’ve broken in, then charted their own paths in their unique styles. Some NCBS workshop alumni are among them. And they continue to inspire and influence me.

Class of 2013, Anil Ananthaswamy is seen fourth from left and author Shreya Dasgupta third from the right. 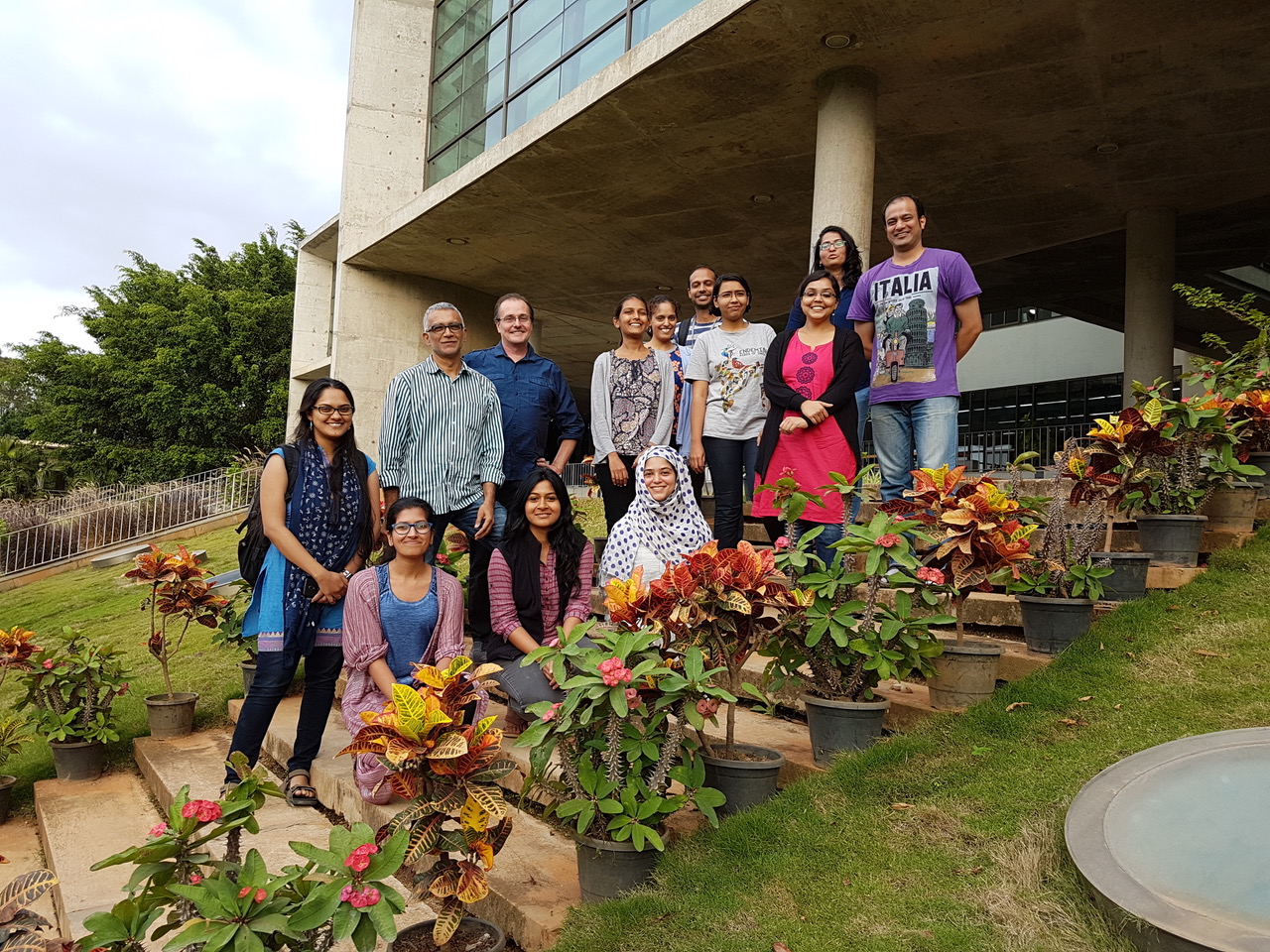