THE ART OF SUBTERFUGE

HOW BUTTERFLY COMMUNITIES EVOLVE INTO A GAME OF WARNING AND DECEIPT!

Students from Dr. Krushnamegh Kunte's Biodiversity Lab have discovered some secrets of a long evolutionary game through which butterflies come to warn, fool and escape their predators using traits such as wing colour patterns and flight

“Imitation is the sincerest form of flattery”, so goes the proverb. If this is true, some animals have definitely mastered the art of flattery. Species that are palatable to predators can sometimes evolve to resemble chemically well-defended or otherwise unpalatable species, thus fooling predators and gaining a survival advantage. This anti-predator adaptation is known as mimicry, and it has evolved multiple times across animal lineages and communities. Müllerian mimicry refers to the condition where two or more unpalatable species resemble each other (referred to as Müllerian co-mimics), whereas Batesian mimicry refers to the evolved resemblance between a palatable species (the Batesian mimic) and an unpalatable species (the model). Several models/Müllerian co-mimics and Batesian mimics may co-exist to form a mimetic community.

Mimetic species are especially common in butterfly communities of biodiversity hotspots such as the Western Ghats in India and the Amazonian rainforests of South America. About 60 million years ago, some Asian butterfly species began feeding on toxic host plants during the caterpillar stage and became unpalatable to many of their predators, who learnt to avoid preying on these species. These toxic species are also aposematic, meaning they advertise their unpalatability with bright, conspicuous wing colours and patterns. Before long, some palatable butterflies followed suit and evolved into Batesian mimics that closely resembled the aposematic models. Interestingly, mimicry in butterflies is not limited to resemblance in wing colour patterns alone, as some mimics have also evolved to imitate the flight behaviours of model species. To find out how these two mimetic traits (wing colour patterns and flight morphology) evolve over time, PhD students Dipendra Nath Basu and Vaishali Bhaumik, along with their PhD advisor Prof. Krushnamegh Kunte at the National Centre for Biological Sciences, Tata Institute of Fundamental Research (NCBS, Bengaluru), investigated the butterfly mimetic communities of the Western Ghats. 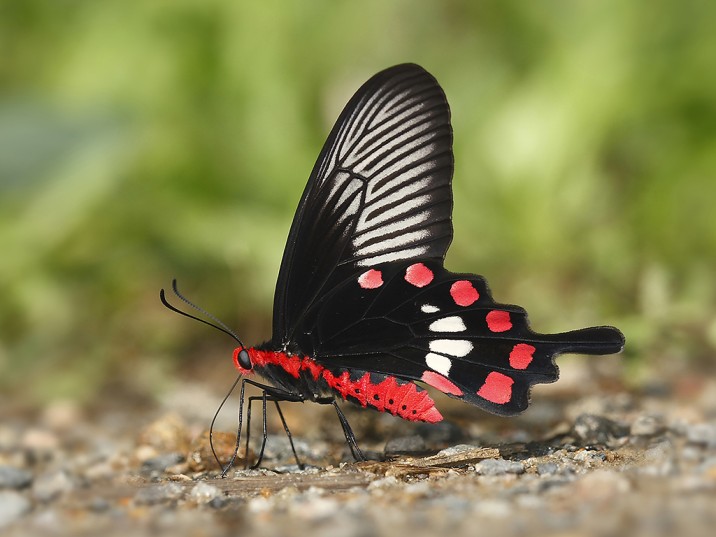 The Common Rose (Pachliopta aristolochiae) is a bright, warningly patterned toxic butterfly that most predators learn to avoid eating. Photo by: Krushnamegh Kunte

Navigating the dense vegetation of the Western Ghats exist 26 butterfly species comprising several mimetic communities. The researchers measured traits related to flight (such as body proportions and wing shape) and wing colour patterns in these butterflies and estimated the evolutionary history of the mimetic traits. Specifically, they measured the rate of evolution of each trait and the amount of convergence in traits between mimics and models, in relation to the traits of the non-mimetic sister species of the Batesian mimics. Their analyses revealed that not only had colour patterns evolved at a much faster rate than flight morphology, but that members of mimetic communities had evolved at a faster rate than their close relatives.

Batesian mimics appear once an aposematic phenotype has already been established in the model species. This means that Batesian mimics must deviate from their ancestral phenotype and undergo considerable change to gain resemblance to their toxic models, which are usually very distantly related and, therefore, with a very different phenotype. Naturally, scientists had previously hypothesized that mimics would evolve at a faster rate than their models as well as sister species in order to converge on the model phenotypes. However, this study showed that toxic models also evolved at high speed, likely as a means of developing distinct aposematic phenotypes that protect them from predators in the first place. 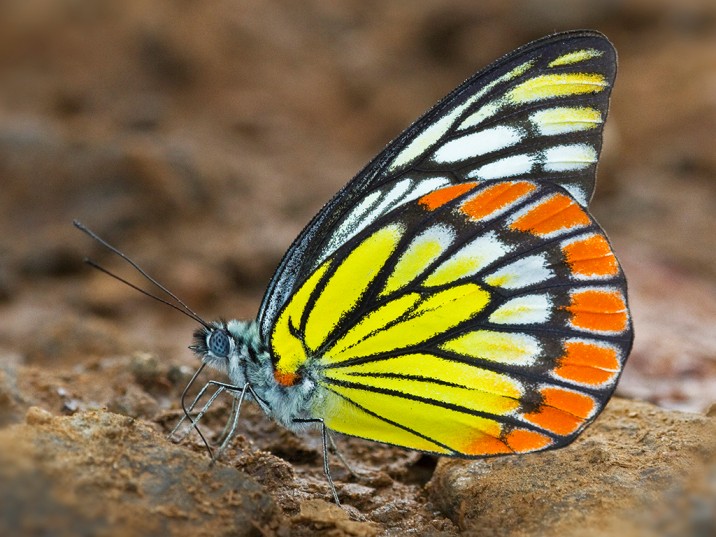 The researchers also found that colour patterns evolved at a much faster rate than flight morphology. Butterflies exhibit a wide range of colours and colour patterns, suggesting that the genetic architecture underlying wing patterns and colour pigments are relatively malleable and susceptible to change. In contrast, a sustained flight is a more specialized form of locomotion that requires fine-tuned morphology and movement. Even slight changes in body proportions or wing shape can have drastic effects on the flight ability of insects. Despite their large wings, butterflies are no exception to these constraints.

These findings shed light on the rate of trait evolution that help butterflies escape their predators. The researchers are now investigating whether the rate of trait evolution is similar in young communities such as in the Western Ghats versus large, old communities in NE India, SE Asia and the neotropics. They suspect that the evolutionary dynamics of functional traits depends heavily on the age, size and complexity of biological communities. They hope that this research will reveal how species diversified and biodiversity flourished in the Indian tropics, creating one of the most striking species radiations on earth.

Citation of the research paper:

This article is written by: