Recently, the campus had the pleasure of hosting two eminent French scientists. Dr Pascale Cossart of the Institut Pasteur and Dr Didier Roux of the National Academy of Technologies of France spent time at the Cluster over two days this October.

For the uninitiated, Dr Pascale Cossart is one of the world’s foremost microbiologists. She has won numerous awards, published several research papers and currently heads the Bacteria-Cell interactions unit at the Institut Pasteur. All of this is very impressive, but when you speak with her it is even more inspiring. You observe the obvious enthusiasm, passion and work ethic that gets conveyed even in casual conversation.

At BLiSC, she presented a talk on, "Molecular Mechanics Underlying Bacterial Infection: the Hysteria Paradigm". The talk was well attended and well received. She interacted with faculty at inStem and NCBS working in the realm of Microbiology. They picked her brains for inputs on various things concerning scientists running laboratories. Publishing papers, ensuring continuity in a situation where many students come and go over the years were some of the things touched upon.

The Comms Office with Dr Anjana Badrinarayan took Cossart out for a fun afternoon. The first stop was the raintree, a sprawling colonial bungalow converted into a gallery, ethnic gift shop and café. She really loved one of the tablecloths up for sale in the gallery, so the team gifted it to her on behalf of NCBS.

Over lunch, Dr Cossart asked about our outreach programs and expressed an interest in the functioning of the communications office. We spoke about outreach and the diversity of the communities and groups we have a responsibility to connect with as science communicators.

This was followed by a pleasant drive out of the city to the Bhoga Nandishwara Temple. A monument dating back to the 9th century AD with a beautiful shrine decorated with intricate carvings. There was a conversation about the art, the architecture and the history of the temple. Dr Cossart even saw a few monkeys that she wanted to see all along and photographed them.

It was great to see another side of Dr Cossart whom we heard so much about.

Our other eminent guest, Dr Didier Roux hailed from Collège de France & Académie des sciences. Dr Roux has had a fascinating career. Alongside years of research in statistical physics and soft condensed matter, he co-founded two biotechnology start-ups. At Saint Gobain, he was Vice President of Research and Innovation.

His day on the BLiSC campus ended with a fascinating public talk titled, "Discovery, invention, innovation: The link between fundamental science and economic development".

According to Dr Roux, the links between discovery, invention and innovation are not linear. They are related in a dynamic way. One may begin with a desire to innovate and stumble upon a fundamental discovery. On the flip side, one may invent something for answering a fundamental question and that invention may be used for an innovation that can create a business. He used examples from his own career as well as the work of Apple’s co-founder Steve Jobs to emphasise his point.

BLiSc is a campus that has three institutes focused on fundamental research, applied science and entrepreneurship through innovation. Many things that Dr Roux spoke about also reminded the listeners about the dynamic way the three institutes interact and support one another. The common campus of BLiSC ensures that the three institutes share so many things, the most important being the people on campus.

Such visits are enjoyable and beneficial beyond their main purpose of scientific collaboration.

An exchange program between the Indian Academy of Science and the Institut de France (French Académie des Sciences) organised these visits. 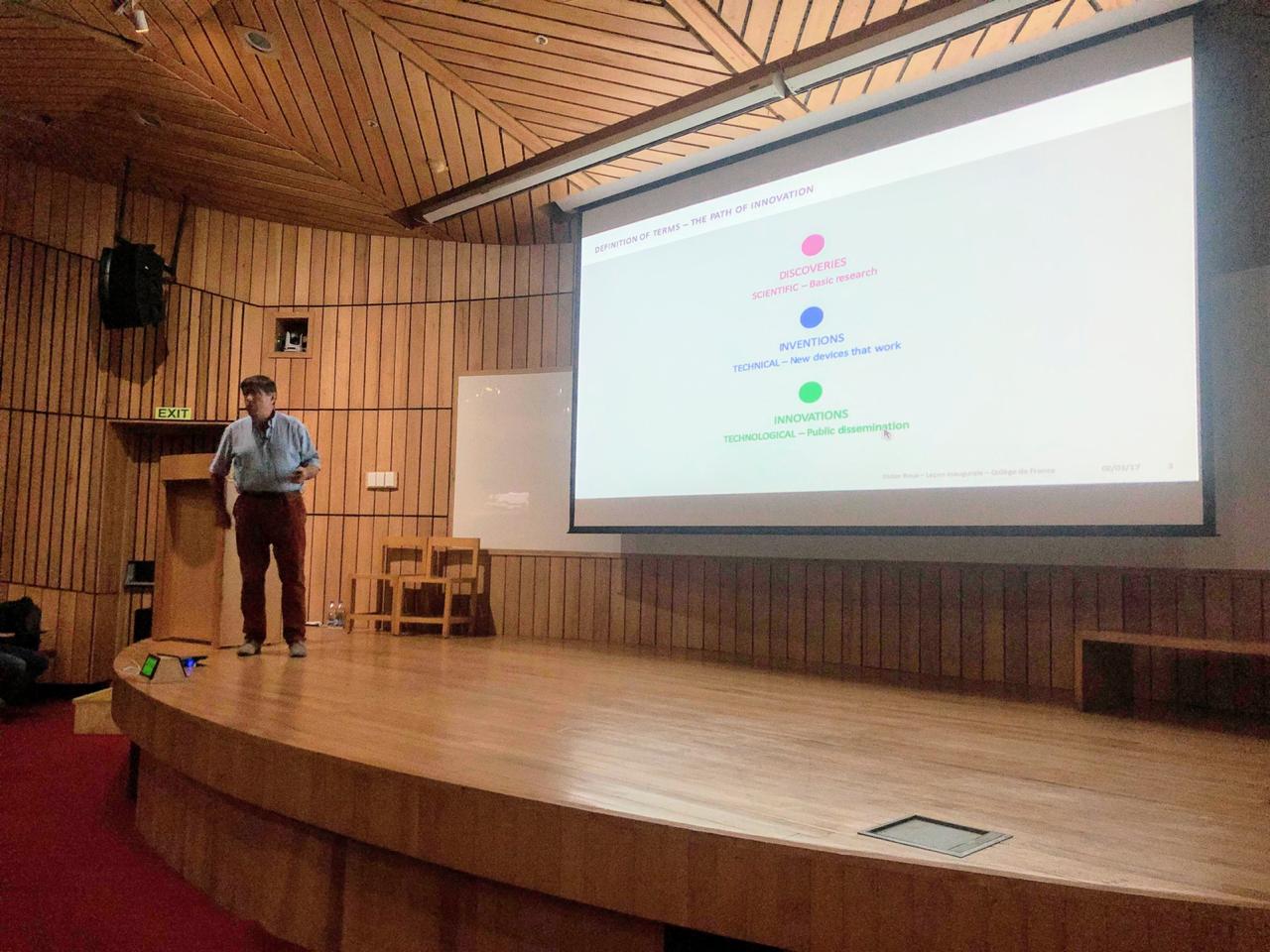 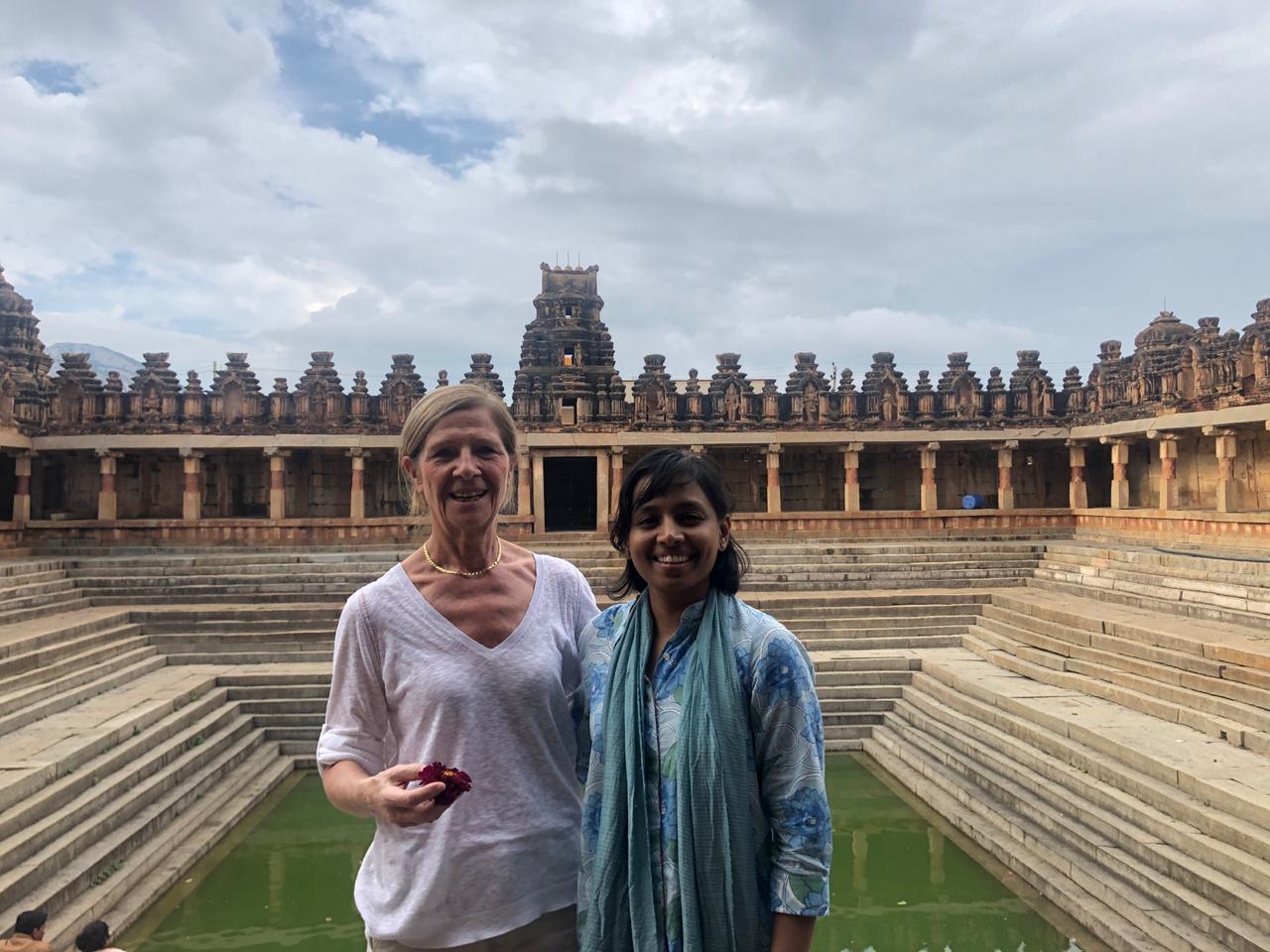 Dr. Pascale Cossart and Dr. Anajana Badrinarayan during a visit to the Bhoga Nandishwara Temple on the outskirts of Bengaluru